Every Naruto fan knows that Sasuke is the perfect counterpart to his protagonist. No matter how many years pass, the character continues to gain popularity polls long after the end of the series and remains a favorite of many people who watched the anime or read the manga. Sasuke Uchiha is one of the few villains (or antagonists) we see growing up in the story, who is turned upside down by choice of power midway through the series and abandons his friends, even though his friends do not abandon him.

For this and many other things, Sasuke is a fascinating character with many potentials to explore and a striking origin, so in this list we will tell you a little more about Sasuke, mixing curious facts with things that only true fans know. 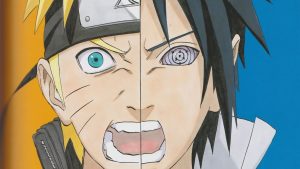 Has a selective palate

In keeping with his personality, Sasuke and his palate are difficult to please. Since he was little, Sasuke has never had a sweet tooth, and his favorite dish is onigiri, a rice ball filled with a wide variety of ingredients and garnished with nori seaweed. For example, Sasuke’s favorite fillings are tomatoes and okaka, a dish made with dried, fermented fish.

Another thing he completely rejects is natto, a traditional Japanese dish made from fermented soybeans, renowned for having a strong aroma.

One of the things that most attracts our attention to Western fans is the zodiac sign of the characters and their dates of birth. Well, in Sasuke’s case, his birthday is July 23, and his sign is Leo. Curiously, for the Japanese, this data is not as interesting as the blood type. They treat the horoscope as we do, giving them personality data and essential characteristics of the character of each one based on that small factor.

Sasuke is older than Naruto, which we see evidenced in a scene that appears in both the anime and the manga of his brother Itachi, holding him in his arms like a baby the night Naruto was born, the nine-tailed fox was released. And in case you were curious about Sasuke’s blood type, it is type AB, and he shares it with his brother Itachi, Shikamaru, and Gaara.

Origin of his name

Sasuke’s name comes from Japanese folklore, a story by Sanpei Shirato, which follows the samurai hero Sarutobi Sasuke. This character appears in many children’s stories, dating from 1911 to 1925. Despite having a fictional origin, the character is based on one of the 10 samurai who assisted Sanada Yukimura in the Osaka Castle battles of the Edo period.

A character named Sasuke Sarutobi also exists in the Naruto universe and is the reason why Sasuke inherits his first name. This character was the father of the Third Hokage. However, his last name is another way of pronouncing the word “uchiwa,” which means paper fan in Japanese. Interestingly, the uchiwa is the symbol of the Uchiha clan. These fans can be used to enlarge the flames of a campfire,

Inspired by a classic

We all know that imitation is the greatest way to show respect. Being a relatively new mangaka to the industry, Masashi Kishimoto had to draw inspiration from other writers to find the best match for the character he created. His greatest inspiration came from one of the works of Yoshihiro Togashi, one of the most recognized mangaka in shonen for works like Hunter x Hunter. More recently, and the classic Kishimoto was inspired by, Yu Yu Hakusho.

At first, Kishimoto evaluated Yusuke Urameshi’s relationship with his classmate Kazuma Kuwabara. Still, the one who really caught his eye as a character model was the mysterious Hiei, whose personality is extremely similar to Sasuke. The character had unmatched power but was quiet, cold, and distant. That’s where the inspiration for Sasuke’s quiet and powerful personality comes from, and we can all thank Togashi for giving us an interesting character like Hiei to serve as inspiration.

He is the hardest character to design

One of the things that Kishimoto has always admitted is how difficult it is for Sasuke to draw. He finds him the most difficult character to draw, being Naruto’s counterpart and his most important rival. His youthful but mature features are one of the things he has the hardest to capture, and even one of the most difficult decisions he had to make was to improve his wardrobe after the start of Naruto Shipuudenwhere many of the characters underwent “look” changes. Sasuke went from having very discreet and covered clothing to the spitting image of an ancient samurai, showing a little skin and his alliance with Orochimaru through the belt he wore. Much symbolism and little effort; thus, the suit did not become the most tedious of working week by week during the publication of the manga. Despite saying that his design is difficult, he eventually became his favorite character, as Kishimoto liked to overcome challenges.

At first, Sasuke appears to be left-handed more prominently, as he punches and uses his special abilities, such as Chidori, with his left hand. However, starting from Shipuuden , he begins to use his right hand to fight with the sword. This leads to an interesting culmination when that little accident happens at the end of the series that shows just how skilled Sasuke is. We do not want to get into spoilers, but if you know what we know, well … this data was necessary to mention.

Kishimoto’s assistant created a spin-off for him.

Many fans must be aware that Boruto is not the first spin-off created for the Naruto saga . But for those who don’t know, Kishimoto’s assistant named Kenji Taira created several spin-offs based on popular characters from the series. The first spinoff was about Rock Lee, and the second featured Sasuke. Curiously, these spin-offs are not serious, but rather the format is “chibi,” small and adorable designs, and following adventures full of humor and fantasy. The spin-off is called Sasuke Uchiha’s Sharingan Legend, and it was published in Saikyo Jump.

Your first appearance is not your introduction

If we asked fans of the series when they introduce us to Sasuke, many of us would answer that it was from episode three, and we would be correct if we only look at the anime. On the other hand, in the manga, Sasuke appears a little earlier than we remember despite not being introduced. In the first chapter of the manga, on page 13, we can see Sasuke sitting in his usual chair, a couple of places beyond Naruto. Considering how important Sasuke is to the plot, the fact that he started with such a subtle appearance right behind Naruto is an excellent strategy.

One gesture says it all

There is a little repeating element in the Naruto series when Sasuke’s childhood moments with his brother Itachi are remembered. There are few flashbacks, but there has always stood out for fans, and it is a small gesture that Itachi had with Sasuke. When he was little, Sasuke greatly admired his brother and saw him as a hero, apart from enjoying a very close relationship. If Sasuke felt inferior to his brother or felt sad, Itachi would touch his forehead with two fingers. This is a gesture that was repeated even the last day they were together. Because of what Itachi meant to him, Sasuke learned this gesture as a display of affection, and once he could even be seen repeating it with Sakura. This may even imply that you genuinely love her. For a character as cold and listless as Sasuke, such a subtle display of affection is truly emotional.

One of the recurring jokes of the fandom is that Sasuke does not love Sakura or his daughter Sarada, but prefers Naruto and Boruto. This is a bit “supported” by the fact that even though Sasuke appears to be a nomad who travels the world trying to eliminate the remains of Kaguya Otsutsuki and his clan, he always has time to stop by and pay Boruto a visit. . Boruto sees Sasuke as an authority figure, as a mentor. Many fans have pointed out that this relationship is very similar to that of another Dragon Ball anime classic and the relationship of Piccolo and Gohan (son of the protagonist, Goku). Naruto, being Hokage, has little free time to take care of his son, and that’s where the company of Sasuke comes in, who is dedicated to protecting and caring for his best friend’s son.

Many of the Naruto characters can summon different animal species to help them during a fight. Sasuke, for example, can summon hawks to increase his mobility. As a curious fact, during his teaching under Orochimaru’s tutelage, he learned to summon snakes, which served him as a defensive and offensive weapon. His ability is so great that as soon as he has the contract, an incredible beast like Manda can appear by his side in just an instant.

A dojutsu is a ninja ability encoded in the wearer’s DNA, manifested through his optic nerves. It is certainly nothing to underestimate in terms of power and mortality. One of the Three Great Dōjutsu, the Sharingan, is seen only on members of the Uchiha clan. Still, a unique and advanced version known as the Mangekyō Sharingan appears even less, only visible to the eyes of those who have been devastated by the loss of someone close. to them

Sasuke’s Mangekyō Sharingan makes its debut after the death of his brother, Itachi; later, Sasuke replaces his eyes with Itachi’s to gain access to the Eternal Mangekyō Sharingan, which is much less strenuous to use and does not have any of the side effects, such as vision loss, than the normal form of the advanced Dōjutsu.

At first it did not exist

Yes, this is hard to believe because it is almost impossible to imagine Naruto without Sasuke. One of the things that makes the story special is their rivalry and Sasuke’s long arc of redemption. However, Kishimoto originally conceived the manga without a rival for his main character since he felt that the rival’s subplot was already heavily used. However, to get Naruto approved as a manga and story, his editor suggested that he include a rival to balance the story, and that’s where Sasuke’s idea came from.

How Can a Building Survey Report Help?