If there is one thing that Boruto inherited from his father, it was the tradition of including filler episodes in his anime, but have no fear, because we bring here the list of these episodes with an additional story from Boruto: Naruto Next Generations, for you. This way, they will know the boruto filler list and decide whether or not to skip those chapters. To help you with this, we also have a convenient summary of each of these arcs. 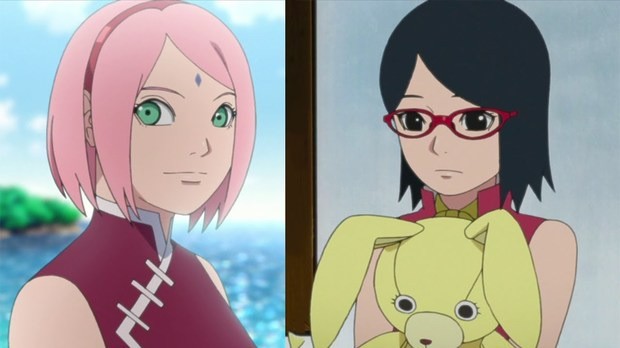 In the first episode, we see Denki training his ninjutsu to walk on the wall. Even with the help of Metal Lee, Denki still fails to master the move properly. Iwabe seems to help too and ends up being helped by Denki in his studies as well. When a fire breaks out, they are late for tests but save three people in a building. Shino acknowledges the use of his knowledge in a real situation and yet approves of it. Discover Everything about kakashi hatake

In the next chapter, we see Sarada and Chouchou trying to learn from Shino how to walk on water. In the middle of trying to get back an order she lost from her mother, Sarada ends up using the technique, but gets distracted, throws the package at Chouchou, and ends up wet in front of her friends.

In episode 33, we see Inojin fighting Chojuu Giga Jutsu. Sai takes him to draw classes, but he loses interest and goes to see Himawari for advice. When the wind blows away Himawari’s drawing, Inojin manages to use the Chojuu Giga to retrieve it and brings what was drawn to live.

In Chapter 34, Boruto and his friends decide to go fishing after seeing an advertisement for a legendary trout. In the end, Toneri has the omen that a major catastrophe is likely to hit Konoha soon.

Boruto, Sarada, and Mitsuki team up and are now Team 7. Their first mission, led by the Jounin Konohamaru, is to repel the bandits from the village of Monte Verde, who are looking for a bridge deed. However, they discover that the village chief was assassinated upon reaching there, forcing his little daughter Kiri to take over.

When a ninja kidnaps Kiri, the group realizes that they need to change their mission. The objective now is to rescue the girl and catch the ninja Iori, who was also responsible for the death of the village leader.

In episode 48, we follow the characters about a week after the Byakuya gang incident. After Naruto announces the exams for Genin ninjas to reach the medium level of Chunin, Iwabe worries about the failures he has been making to get involved with Denki and Metal. The situation worsens when Team 5 is tasked with appearing in a movie. When the recordings are canceled, they end up having to save the filmmakers from a dilapidated building.

In the next chapter, we see Team 15, Hanabi’s squad, tasked with capturing wild animals that ended up being released. Episode 50 shows Konohamaru, Udon, Moegi, and Shino remembering when Boruto and Denki collided with the train car on Hokage Hill. Hanabi then discusses Chunin’s exam, drinks, and gets drunk with Shino, causing a mess that Naruto needs to intervene in.

Boruto and Chouchou are tasked with protecting the actors of a soap opera they like, Tomaru and Ashina. When the ninjas attack and Ashina get hurt, Tomaru suggests that Chouchou replace her in the novel. After discovering that the actor was only playing with her feelings and is still prejudiced against fat people, she is completely disappointed and focused on her mission, not impossible love.

When they return to face the mysterious ninjas, they discover that it was all a frame from Ashina to get attention. When the actress activates bombs that topple part of the mountain, Chouchou saves Tomaru. The actor invites her again to participate in the novel, but she prefers to follow her as a ninja.

In episode 70, we see Metal dealing with his anxiety. Although he tries to rely on different amulets, the young man only advances when he follows Guy’s advice and faces his anxiety head-on. In a Taijutsu battle with Lee, he manages to execute the Konoha Senpū (Leaf Hurricane) for the first time and wins the fight.

Shikadai and the rest of the group are concerned that Boruto can deal with the pain of Mitsuki’s betrayal. Coming to a drastic conclusion, Garaga decides to go after Mitsuki and forcibly take him to Leaf Village, as Naruto once did with Sasuke.

Episode 96 focuses on Namida from Team 15. She can use a special technique that paralyzes hearing with her crying and can even make the opponent faint. However, any mistake in using this technique can hinder the mission, causing you to stop using it. He then decides to train to become stronger and protect his teammates.

In chapter 97, Shikadai decides to enter politics, but he needs to find a way to tell his family and friends about this.

Episode 104 follows Team 7’s mission to help police officers find a jewel thief named Nezumi. On the run, Nezumi hid the jewels and mixed them with drunken men on the street, being arrested only as a suspect.

After the search, Boruto, Sarada, and Mitsuki find a kitten on the street and Mitsuki ends up staying with him. When the animal falls ill and the thief Nezumi tries to steal it, the group discovers that the criminal had caused the cat to swallow the stolen jewel.

The next chapter deals with Mitsuki’s memories, from the knowledge of onoki to the last incident in Vila de la Piedra. Orochimaru, who was viewing these memories with Log, is concerned and says that it may be necessary to erase the young man’s memories.

The first three episodes of this series of fillers respectively address the problems that Boruto, Shikadai, lwabe and Wasabi had with finding a rare flower due to childhood conflicts. The battle that unfolds to decide who will occupy the last “wave” with a famous card game with the theme of the famous ninjas, Shino or Rock Lee; and a bit of the history of Team 25, a forgotten group of warriors.

In the following chapters, we accompany Boruto and Konohamaru trying to save young Yoimura Remon from a monster named Sōma and a strange ritual that imprisons the girl. But there are more secrets in this city than the warriors could imagine.

In episode 137, Sumire decides to get away from Team 15 to join the Ninja Weapons Science Team and pursue their research. As his friends throw a farewell party, an Iron Country samurai appears to fill the vacancy Sumire left on the team.

It’s Boruto’s grandfather Hyuuga Hiashi’s birthday in the next episode. Boruto was in charge of preparing a gift for him, but he needs to find out what would make his grandfather happy. In chapter 139, we follow Boruto’s old classmate Enko Onikuma. A member of Team 40, she has been obsessed with summoning animals since her childhood and has developed incredible abilities. However, she begins to lose control over her powers, which may cause her group to break up.

In episode 140, Inojin needs to train his Mind Transfer Jutsu. For that, he has the help of Chouchou and his parents, Sai and Ino. With Inojin unable to perform jutsu and to need to work on his willpower, Sai and Ino end up arguing.

Medical Ninjutsu training takes place during Episode 152. With only one member of each team authorized to participate, Sarada is chosen from Team 7. As her mother, Sakura, is an expert in the technique, expectations about healing are great, but it turns out that her healing ninjutsu isn’t that strong, and she tries to hide her frustration and pressure.

Since Sumire’s departure and Tsubaki’s arrival, Team 15 has struggled on their missions, despite the new member being an excellent samurai. To train their skills, in chapter 153, they decide to compete with each other on missions, but that only makes the situation worse.

Boruto’s younger sister, Himawari, is the focus of episode 154. Interested in learning about the different options she may have for her future, she participates in an experimental class at the Ninja Academy. She meets another aspiring ninja who is irritated by her indecision and criticizes her and accuses her of just wanting to have fun there.

In episode 155, Mitsuki takes care of her kitten and ends up meeting a lonely man who has become attached to the animal. The mysterious man claims that he came to Konoha to meet his sister. Meanwhile, Team 7 is tasked with protecting the president of a company who seems unaware that his life is being threatened by a serial killer known as “The Bloodthirsty Killer, Rain.”

To highlight the canonical episodes of Boruto: Naruto Next Generations, we first have to explain one thing: some of the anime is based on the manga, but most of the episodes are an adaptation of the light novel that brought the story of the events. after Naruto Shippuden .

For this reason, the anime’s story takes even longer to get to the point where the manga already stands. For this reason, also, we can have the following Boruto Filler list:

Everything about kakashi hatake