Monogatari is the name given to a series of Japanese light novels written by the novelist Nisio Isin. Vofan, a Taiwanese illustrator, illustrated the books. There are 24 novels published since 2006, and 5 more stories are planned to be released soon.

The novels have been adapted into anime by SHAFT, and the adaptations have been an enormous success. The Monogatari anime comprises the main story and an anime Monogatari series of smaller short stories that feature different characters within the same universe.

They all follow a theme of strange characters with strange afflictions within beautifully constructed stories that carry deep meaning while being light and fun to watch. 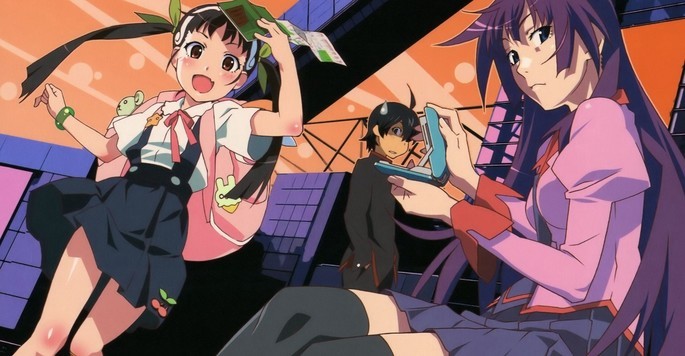 Below is a breakdown of the different seasons, which are vital when it comes to knowing the order in which to watch the series:

The series can be viewed in chronological order, but this is not necessarily recommended as the best way to see the stories for the first time. The second and final season’s release has changed the chronological order for a bit of loop, as the series was never intended to be viewed chronologically. The purpose of a shuffled timeline was to create some mystery and anticipation and help add some important revelations along the way.

Although the Monogatari series is a big world with many characters, it all relates to a common theme. There are three recommended orders for viewing the Monogatari series, depending on your knowledge of the series and how you prefer to experience it. There is an order for beginners faithful to the novels and an order for those who have read the novels and want to see the series chronologically.

This order is recommended for those who are entering the series for the first time. This is how most viewers have followed the story since it is the most logical order: the order of launch of the animation’s seasons and chapters is followed.

Seeing it in this order is how SHAFT intended it to be and possibly the best order for first-time viewers of the series. The biggest difference in this order is that Kizumonogatari, the origin story, is only shown later. Some feel this might leave many unanswered questions for first-time viewers, but the other seasons and episodes provide enough information to follow the storyline.

Typically this is the order in which most English viewers have enjoyed the series as it was released as such for viewing.

2. Nisemonogatari (2012) – Stories of the Tsukihi Phoenix and Bee Karen.

4. Owarimonogatari (Part 2) (2017) – Story of the encounter with Hitagi, stories of Ougi Dark and Arargi Koyomi, including other stories that could spoil the plot.

5. Zoku Owarimonogatari (2018): This installment was initially released as a movie but will be made as a 6-episode screening in 2019. It’s the reverse story of Koyomi.

Out of season (Off Season):

Do you want more vampire content in your life? This list is tailor-made for you! Discover the best vampire series and movies!

Many people find that rewatching the series, or watching it after reading the novels, is best enjoyed in chronological order. The number of stories and characters in this universe means that there is a lot to see again, and there are always new things to learn the second time around.

The chronological order is recommended for advanced fans, who will not be confused by missing information that has not yet been revealed or clarified. Beginners will get a bit lost in this order, as there will be a few jumps between certain novels before finishing one at a time.

This order is the original release order for the light novels. It is the order in which the author Nisio Isin intended the novels to be read. The chronological order is changed throughout, but this is completely intentional and works to create a complete story and character universe.

If you want to enjoy the stories as they were created to enjoy them, this is the order to follow. It will be a bit devoid of the mystery and anticipation that Kizumonogatari brings and a few small changes to the narrative, but it stays true to the story.

2. Kizumonogatari (2008) – Prequel to the Monogatari series.

4. Otorimonogatari (2011) – The story follows Medusa Nadeko and her journey to fend for herself.

4. Zoku Owarimonogatari (2014) – This was originally going to be released as a movie, but it split into six episodes in 2019. It tells the story of Koyomi, but in reverse.

Out of season (Off Season):