Facebook Twitter LinkedIn Tumblr Pinterest Reddit VKontakte Odnoklassniki Pocket
Many still wonder what beauty is … for this count, we rely on that beautiful anime girl not only beautiful on the outside but also beautiful on the inside, those who see them walking, talking or simply making their lives make us envy or want to be with them. For that, they must not necessarily have the super large oppais or the most toned body of all, but they do have it better for us.

These girls that we will see next are the 10 most beautiful anime, in addition to having sublime personalities, good feelings and, in some cases, consolidate as warriors that make us melt with their abilities. And although we could make an almost infinite list, you will see the reason for the election. Let us begin!

The most beautiful anime girl

10. Shizuku Hanaoka of Ballroom and Youkoso

[English: Welcome to the Ballroom] 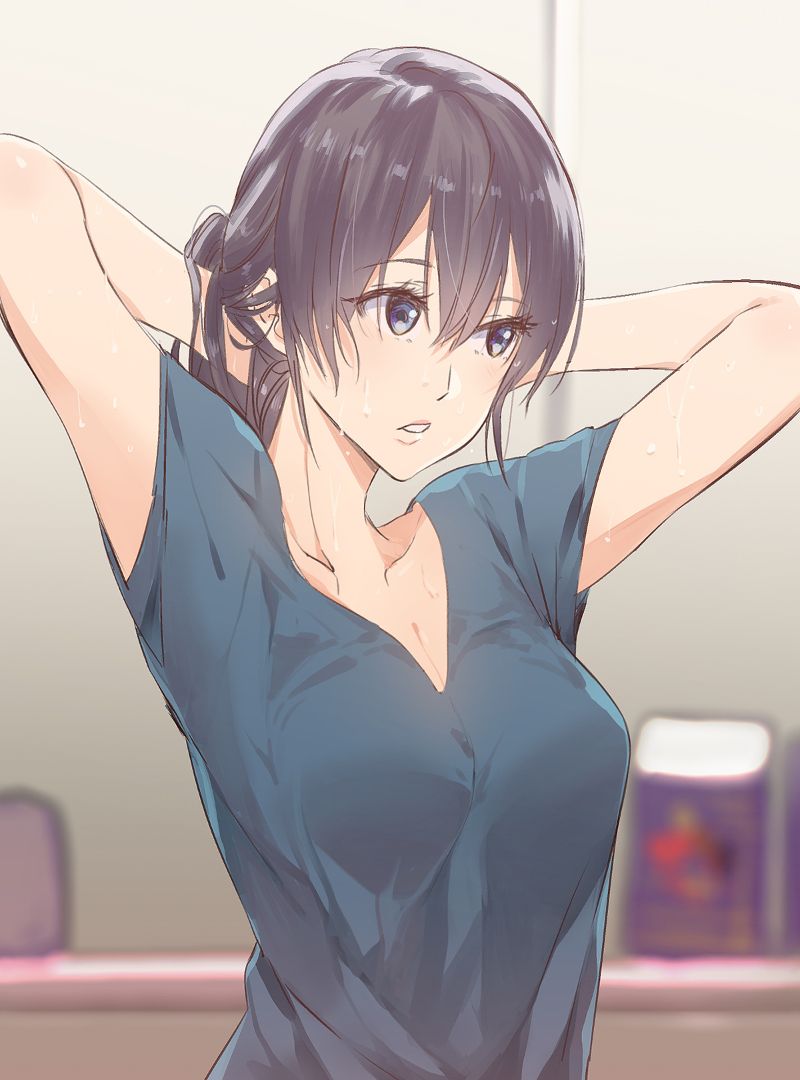 There are thousands of ways to attract looks, and Shizuku Hanaoka, one of the main characters of the anime, does it in the most elegant way in Ballroom and Youkoso. She is a beautiful and slim dancer who hypnotizes not only for her charms when she is on the dance floor but also for her humble and very honest attitudes, which left her first dance partner breathless at the Ogasawara Dance Studio, Tatara Fujita. She is one of the most beautiful anime girls.

Shizuku, besides being an amateur dancer, is also a normal 16-year-old girl who studies in high school. She is kind to everyone around her, including Tatara, who has to have a lot of patience while learning the art of dancing. On the other hand, seeing Shizuku with makeup, dress, and heels on the track is just as glorious as seeing her with glasses and a uniform in high school, since her beauty is always present in any of her facets. 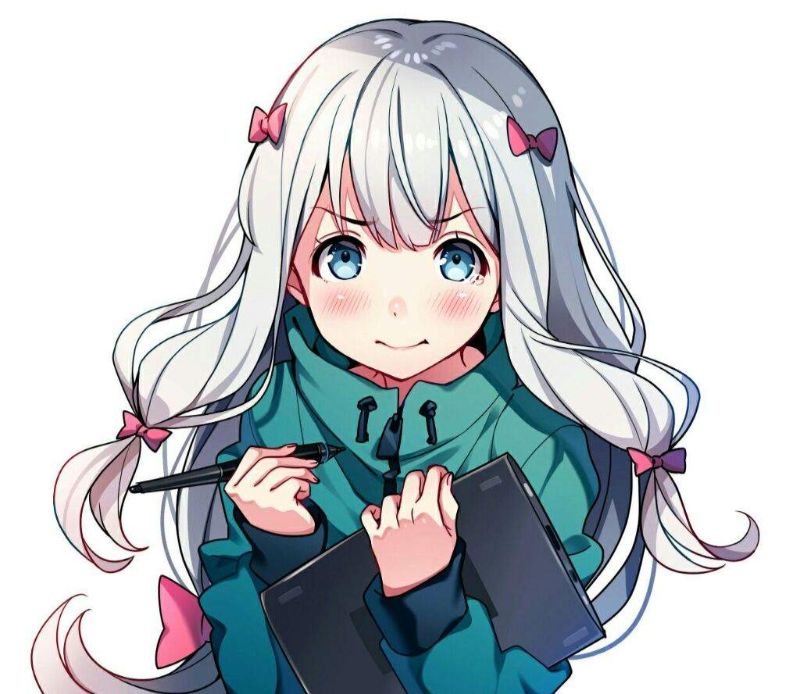 Sagiri Izumi is a very reserved girl who not only hides from the world but little is seen by her stepbrother Masamune Izumi … and this is not precisely because she is ugly. Sagiri is a talented illustrator who doesn’t let anyone tell her what to do. In addition, the few times he is seen by his brother, both its exterior and interior beauty are as much, so even Masamune seems to feel some attraction for her. She is the most beautiful anime girl.

[English: The Pet Girl of Sakurasou] 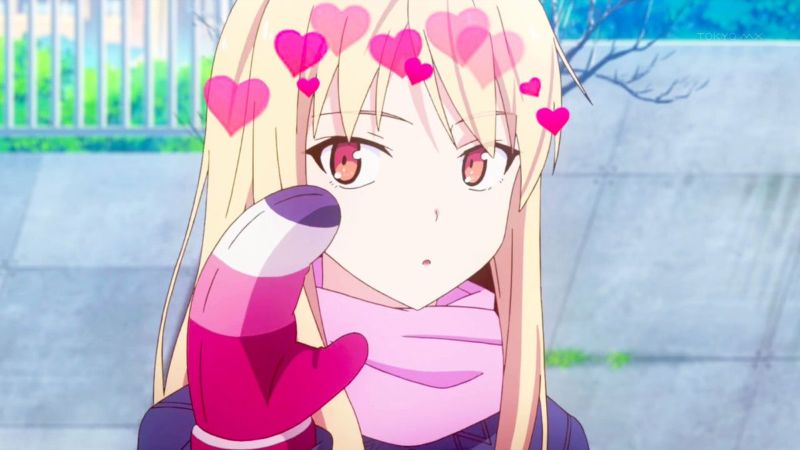 Mashiro Shiina is not just any student at Suimei High School; In fact, her fame as a painter makes her much more important than she would like. In Sakurasou no Pet na Kanojo, Mashiro is extraordinary in everything that refers to art and manga. Unfortunately, her artistic dedication throughout her life caused her to depart from essential things such as common sense, which makes her a very fragile and inexperienced girl in terms of social issues.

However, everyone wants to meet her since she is not only outside beauty and talent, but innocence combined with a sweet voice and charming kindness, which causes an almost indescribable condition for everyone, and more for Sorata Kanda, her roommate. Sorata does not resist a minute to such charms and, although sometimes he must impose some character, he spares no effort to make Mashiro as comfortable as possible. That’s what we call the “Mashiro effect”! 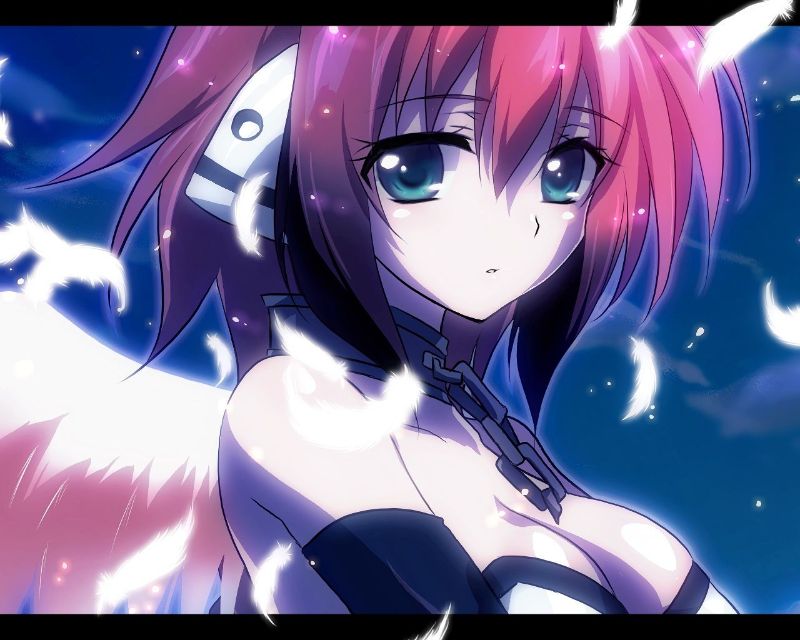 The physical majesty of our next member, Ikaros, is visible to everyone. It is not necessary to be a beauty scholar to realize that this angelic character of Sora No Otoshimono leaves anyone speechless. Her big breasts – which she barely covers – are a magnet for all eyes that rest on her, and if we add her ability in battle and intellect, we have perfection made the woman.

Ikaros is actually an Angeloid, an android angel created to be a weapon of destruction, coming from a world called Synapse. He also has impressive battle skills, in addition to huge and beautiful wings which he uses when necessary. However, what she has as a fighter lacks emotional, because the feelings that Ikaros can become very limited, although this does not prevent her from being very noble and the guardian angel of Tomoki Sakurai.

[English: Re: ZERO -Starting Life in Another World-]

And if we talk about inner beauty, we could not exclude from our ranking to Emilia of Re: Zero kara Hajimeru Seikatsu Isekai. This beautiful silver-haired elf half possesses as many virtues as the magic within her, especially if we consider the sense of belonging to her people, the Kingdom of Lugunica, which she estimates with justice, responsibility and spontaneity that every candidate to govern The country must-have.

Of course, Emilia must also highlight her loyalty to people who deserve respect, proof of this is the love she offers in a selfless way to Subaru Natsuki, an inhabitant of the Earth who falls unexpectedly in the Kingdom of Laguna. Almost for no apparent reason, Emilia accompanies him in his stay in that new world, overcoming with great persistence all the evils that go through him. 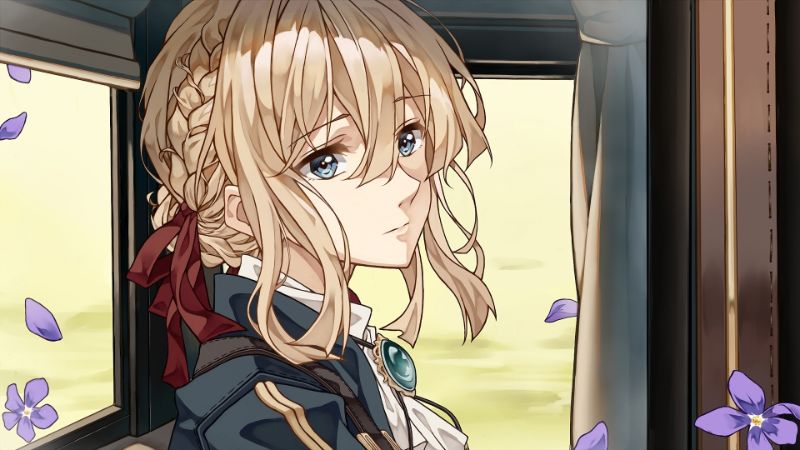 Who said that to be natural it is required to be 100% human? Violet Evergarden is responsible for demonstrating the opposite! This young and delicate former warfighter has a very complete personality to be an Auto Memory Doll, a computerized assistant that makes human life easier: from her humble way of seeing reality to her commitment to achieving the goals proposed, in your eagerness to know the truths about human feelings.

To say that someone like Violet has no ambitions in life would be to tell a vile lie, because the truth is that his determination to feel the meaning of the words “I love you” guides the compass of his life, always with the same nobility and sincerity that He has demonstrated since his participation in the war. A good game in every way! 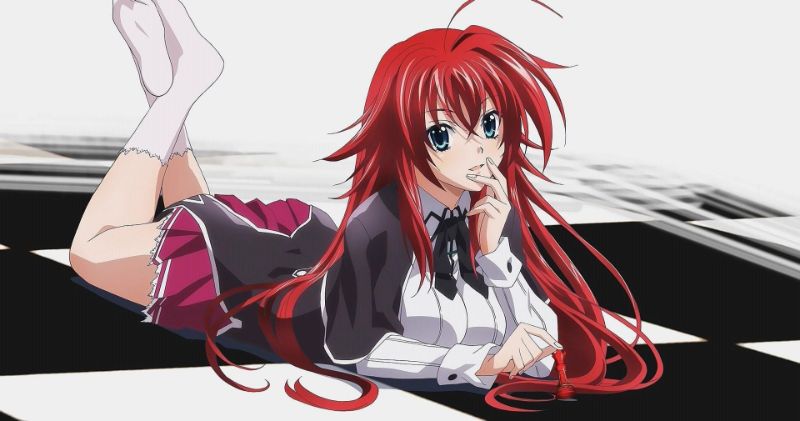 When we talk about Rias Gremory, we mean the most beautiful demon we can get in the anime. In High School DxD Hero, Rias demonstrates not only an enormous sensuality and his habit of sleeping without any clothes, but also a kindness with others rarely seen.

But this exotic redhead leader of the Occult Research Club at Kuoh Academy also has qualities that make her very human, like the jealousy she shows every time Issei Hyoudou is not close to her. Sometimes it can seem very controlling because of her intense feelings for him, but even her shortcomings make her even more charming!

[English: My Girlfriend is Shobitch] 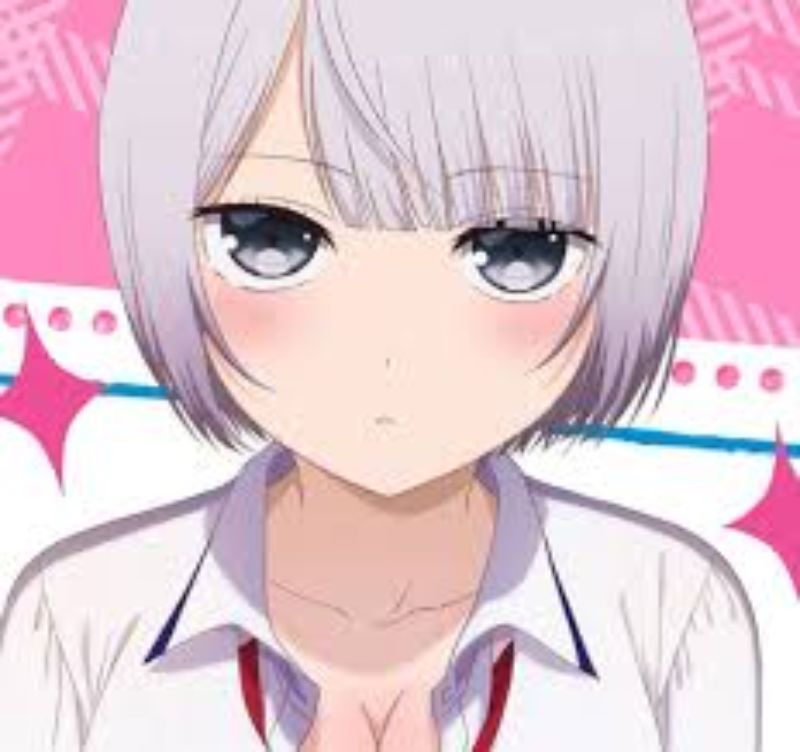 Innocence, spontaneity, lust and fun, all are words that perfectly define Akiho Kousaka, the protagonist of the series Boku no Kanojo ga Majimesugiru Sho-bitch na Ken. There, this beautiful and sweet schoolgirl demonstrates her most sensitive side by opening up to her first love experience with Haruka Shinozaki, and with it, to the rogue learning of how she should behave whenever she is with him. 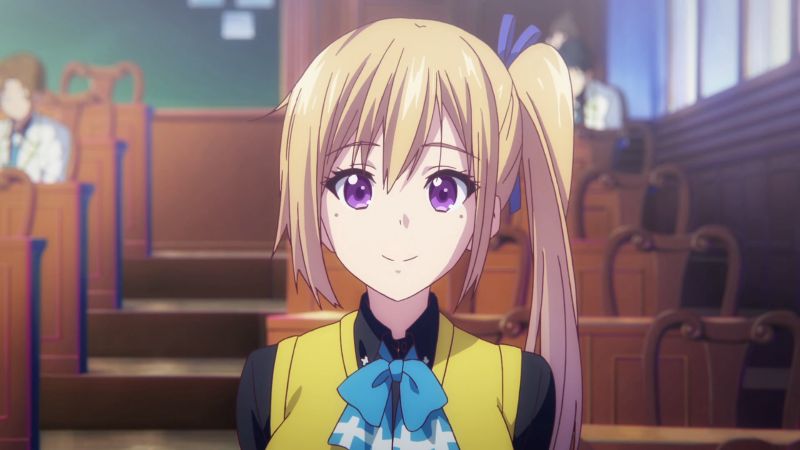 In the second position, we have the always cheerful and outgoing Mai Kawakami, a ghostbuster who also steals hearts everywhere. In Musaigen no Phantom World, this pretty girl with a determined personality and purple eyes adorns any stage with her smile, and even in the darkest situations, she knows how to carry out all her human potential and her great physical strength. How not to consider her beautiful?

It is precisely his vast power that most hypnotizes Mai because, with his ability to channel the natural elements through his body, thanks to the Spirit of the Five Elements, he can subdue any monster or supernatural entity that opposes her … without obviating his leading participation in Team E, his ghostbusters group. 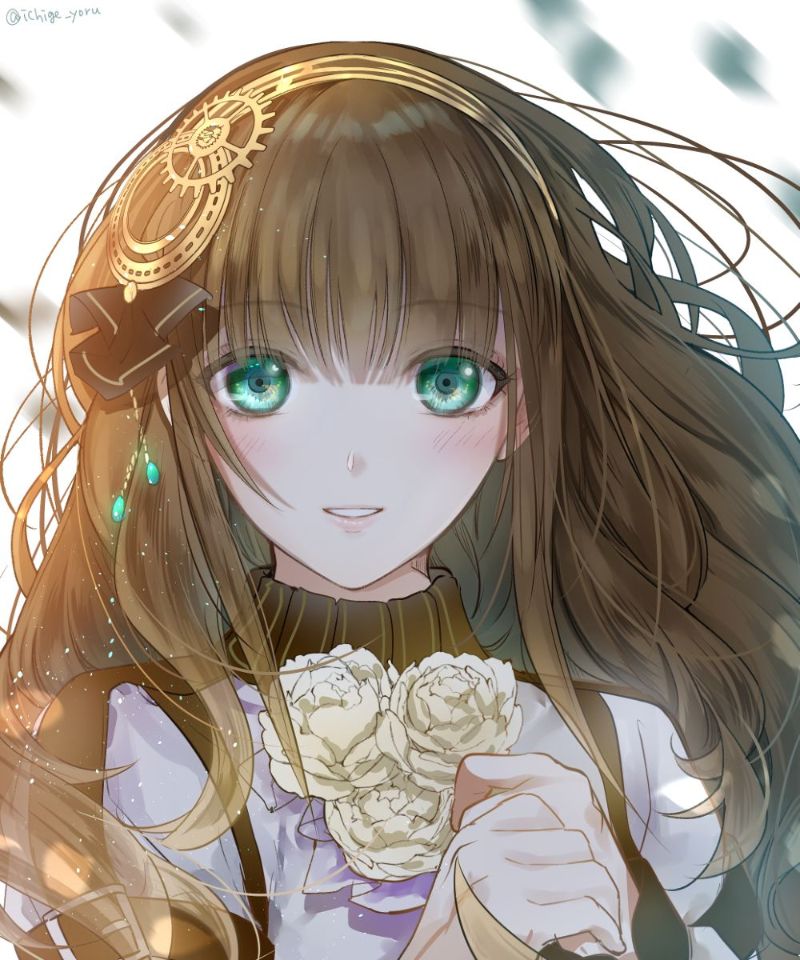 And we reach the top spot with Cardia Beckford of Code: Realize – Sousei no Himegimi , the tender girl with a particularity that pursues her without wanting to: she wants to do good for others, but just by touching someone can cause her death, everything this thanks to a powerful toxin that is inside it. She is the most beautiful anime girl.

But in the face of this adversity, it is precisely her sweetness that causes Cardia to float in a world she has virtually no idea about, and with that makes us fall in love more and more with her. Even so, with the help of Arsene Lupine, a thief knight who gets on the road, this beautiful girl demonstrates an admirable tenacity to get her father, Isaac Beckford, who could clarify a couple of things about his very existence.

You may like-  THE ANIMATED MOVIES THAT YOU CAN NOT MISS