Previously we talked about shonen, seinen, and josei … but we have not yet mentioned the genre preferred by the female audience: shoujo.

The shoujo genre is aimed at young women, usually under the age of 16, that is, girls and adolescents. It usually focuses on the main character and their love relationship. In the old days, famous authors were all men, but at one point starting in the 1960s, women began to gain ground in the genre to tell problems or stories entirely of their own.

Today the genre is the favorite of many people, not just women, and it is one of the most successful industries in anime. In this list we will show you the best shoujo anime out there, which have either marked a milestone in the industry or have only recently started to make their mark. Let’s get started with the best shoujo anime! 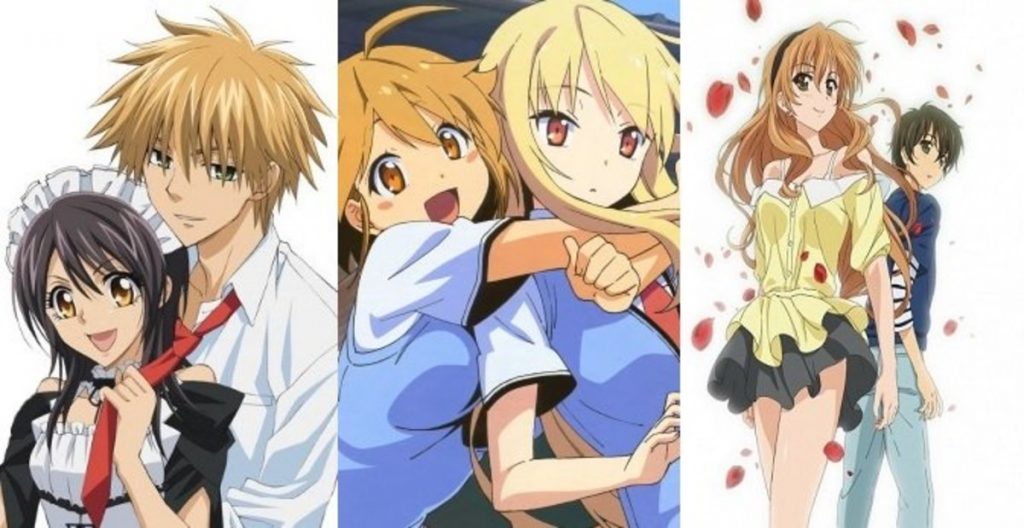 Pray Monogatari !! differs a bit from typical shoujo anime as the focus is on a boy’s feelings. Takeo is tall and muscular, intimidating to the women of his school due to his appearance. Because of this, the girls do not notice him, but rather fall in love with his best friend Makoto, who is kind and handsome.

One day, Takeo helps little Rinko out of an awkward situation and develops an instant crush. However, continuing the logic with which he is familiar, he assumes that the girl likes Makoto, and goes to great lengths to bring them together.

Pray Monogatari !! It is a romantic and fun anime, and its message is very important: we must accept ourselves, because only then can we find someone who loves us for who we are.

Ryuji Takasu is a kind, gentle and well-mannered boy, but unfortunately, he has the features of a delinquent. Taiga Aisaka has a negative attitude towards others and is known as the living room tigress since if you mess with her, she will bite you.

They both have a common interest: Ryuji likes Taiga’s best friend, and Taiga likes Ryuji’s best friend. They become reluctant allies to help each other conquer the masters of their affections, and when things start to emerge, they realize they have too much in common and care a lot for each other.

Toradora! is a funny anime with very endearing protagonists, whose personal growth is worthy of admiration and the comedy situations make every minute worthwhile.

Tooru Honda ends up living in a tent after his mother’s death. This, until her classmate, Yuki, and her cousin, Shigure Souma, offered her a place in their house for her to live. But the boys are hiding a secret, which Tooru finally discovers. In fact, the Souma family is cursed and family members turn into Chinese zodiac animals when hugged by someone of the opposite sex.

Fruits Basket stands out from most of the Shoujo anime due to the way the characters grow emotionally. And while packed with lots of fun and romantic moments, the series offers some of the most dramatic story arcs in the genre today.

Haruhi Fujioka accidentally destroys a valuable vase, located in a secret club at her high school. There, a group of students are dedicated to entertaining and accompanying girls for fun. This makes the girl indebted to the eccentric members of the club, so she begins to work for them, to pay her off.

This anime is a fun love story with quirky and strange characters. In fact, the way characters grow emotionally can bring great depth to a plot that sometimes seems too simple. And although the series does not have a satisfactory ending (since the manga had not finished when they adapted it), it can be described as a happy ending.

Due to her father’s debts, Nanami Momozono loses her home and lives on the street. But even so, she does not hesitate to save a man she meets on the streets. This mysterious man is, after all, a god, and he sends her to his ruined temple for Nanami to take his place and her duties. This is where he meets a boy with fox ears, who has to earn his trust to be successful in his mission.

Kamisama Kiss is a fun anime full of supernatural elements. Nanami is a strong and determined protagonist, and the story unfolds around her relationship with Tomoe, the fox boy, and how she will help him open his heart to humans again.

Lovely Complex is a mix of comedy, romance, and drama. His characters are full of life, but they also suffer from insecurities.

Risa Koizumi is 172 cm tall, one of the tallest girls in school. Atsushi Ootani is already considered quite short at 156cm tall. Also, the two of them spend their lives arguing. But as time goes on, they both begin to realize that they have more in common than they think.

Shizuku is a girl focused on her homework in such a way that she has a cold outlook on life. When she starts taking notes from Haru, a colleague who dropped out of school after a fight, the girl begins to see her life beyond the sterile routine in which she lives.

Shizuku and Haru are two characters who know very little about human interaction and the strength of Tonari no Kaibutsu-kun (also known as My Little Monster ) lies in how they both try to learn to master their emotions.

Futaba Yoshioka has always caught the attention of children and was therefore left out by her classmates in high school. Now, in a new school, the girl decides to change her attitude completely, becoming a tomboy with a voracious appetite and stomping her feet as she walks.

However, her plans are complicated when she meets Tanaka, a boy from her old high school with whom she has a crush. Ao Haru Ride is a journey to the center of turbulent teenage emotions. With each passing episode, the audience becomes increasingly attached to the characters and their infighting.

Being the first female student council president is not easy, especially when your school has just moved from an all-boys high school to a coeducational one. Misaki Ayuzawa, aptly nicknamed “The Demon President” by boys for her strict disciplinary style, is not afraid to use her mastery of Aikido techniques to judge hordes of misbehaving students and defend girls in high school. Seika.

Yet even the perfect Ayuzawa has a shameful secret: She works part-time as a maid at a maid cafe to help her struggling family pay the bills. He managed to keep his work hidden from his peers and maintained his impeccable image as a stellar student until one day Takumi Usui, the most popular boy in school, walks into the cafe. You could destroy her reputation with your secret, or you could also take advantage of this information to get closer to her.

Cross Academy is an elite boarding school with two separate and isolated classes: the day class and the night class. On the surface, Yuuki Cross and Zero Kiryuu are prefects of the academy and try to maintain order among the students as classes rotate in the afternoons. As the evening class is full of extremely attractive elite students, this can be a bit difficult at times. However, it is completely necessary, as these “elites” are actually vampires. Yuuki and Zero act as guardians, protecting the secrets of the Night Class and the safety of their ignorant morning counterparts.

As the adopted daughter of the president of the academy, Yuuki takes her job with a serious and energetic attitude. It also allows her to interact with her crush and secret savior, the president of the night’s dorm, Kaname Kuran. Zero, on the other hand, has a deep-seated hatred against vampires and doesn’t hesitate to kill them at times.

Can vampires and humans coexist, even in the strict Cross Academy setting? Only time will tell.